Skip to the content
Get the course
for just £27 today

Unless you spent the whole of 2020 under a rock, you may have noticed a practice from the conciousness-raising community edging it’s way into mainstream consciousness fast – namely, that keeping psychically healthy in these turbulent and wildly confusing times requires us to develop discernment concerning what ideas and stories from the press / social media / governments / 3-letter agencies we allow into our minds. To those who have developed this discernment, the evidence of propaganda and fear-porn affecting the minds, emotions, behaviours and even the sanity and health of a majority of the population is unmissable. And while these unfortunate victims of propaganda continue to quote ‘science’ (frequently, massaged statistics) and ‘experts’ (frequently, bought off or threatened fallible human beings) as reasons for their altered attitudes, behaviours and emotional states, they act as an object lesson for those who are waking up – a lesson that demonstrates the power of repeated and subconsciously absorbed ideas on minds that refuse to acknowledge the danger of this propaganda.

As upsetting as it is personally for each of us to wake up and finally see the sheep and the shepherds, on a societal level this is great news. It’s a sign that we are beginning to address, as a society, our lack of self-awareness, our gullibility, our Stockholm-Syndrome style belief that our ‘leaders’ mean us well.

All good and well, but it must be understood that the hypnotically-crafted word and the carefully edited image are not the only forms of societal engineering. There are many. Left unmolested and healthy, the human mind is strong and well-defended. Societal engineers understand this, which is why they use every emotional / psychological method they can get their hands on to wear down the sovereignty of each of us and force-program us with their ideas.

One of these methods is music.

Music is a powerful tool for behaviour modification: it can alter the mood and behaviour of whole crowds almost instantly, it can effect permanent changes in our psyches slowly enough that we don’t even notice, and best of all for societal engineers, the vast majority of our society views music as mere entertainment – a harmless frivolity that has no effect on us beyond its momentary emotional influence. It’s power is hidden in plain sight.

This society-wide underestimation of music’s powers is no accident. The societal engineers wanted it that way: it makes their job so much easier.

So, the important question for you is: while you may have acknowledged and addressed the influence that these people have over you through words and images in the media (to use the modern term – you’ve unplugged),

What have you done to understand, and defend yourself, against their influence on you through music?

If your answer, like most people’s, is “Not much. I don’t understand how to do such a thing.” then that’s why you’ve found this page: The Conscious Music School is here to provide you with the structured method you need to discover and develop this discernment and psychic sovereignty concerning your music listening habits.

In The Conscious Music School’s new course, “Soul-Food Or Poisonous Music? A begginer’s guide to music appreciation for your psychic and emotional health” you’ll be taken through a step-by step process to bring the subconscious drivers and effects of your music listening into the light of your conscious mind, where you can examine them, understand them and make wiser and more conscious choices in the future concerning what you listen to. 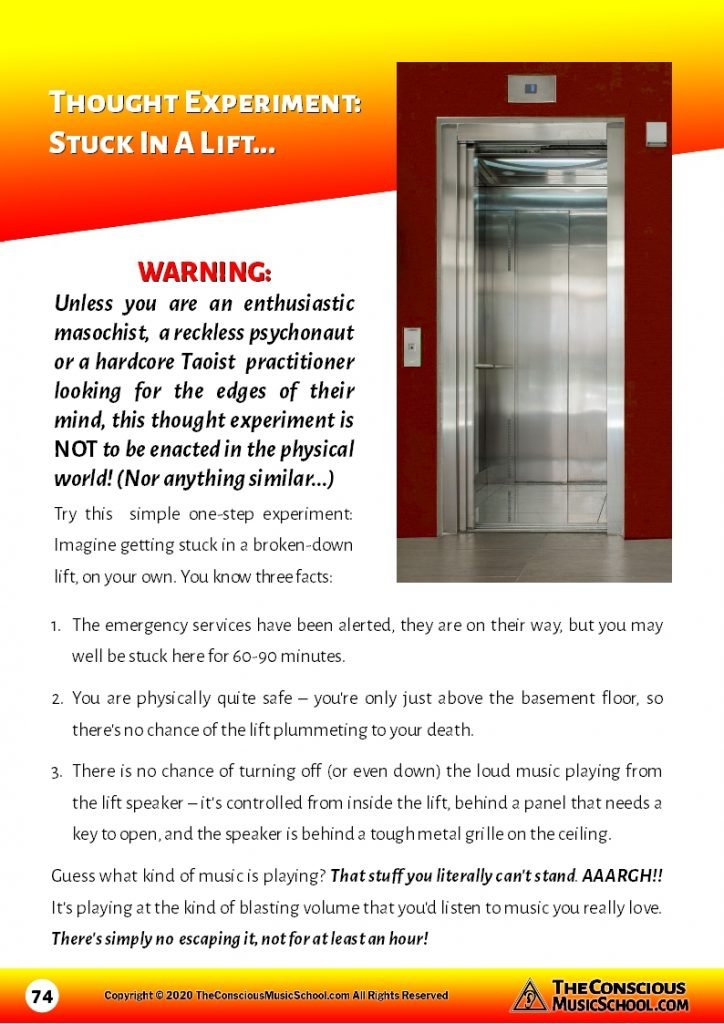 Soul-Food Or Poisonous Music? is a 108-page course that will help you peek inside the workings of your own mind and heart while you are listening to music, offering you a better understanding of your desires and tastes, and the effects your subconscious mind is really looking for or trying to avoid.

It’s packed full of exercises to tease out the subtleties of what you’re experiencing and give you better handles on all the various aspects of your experience of music. 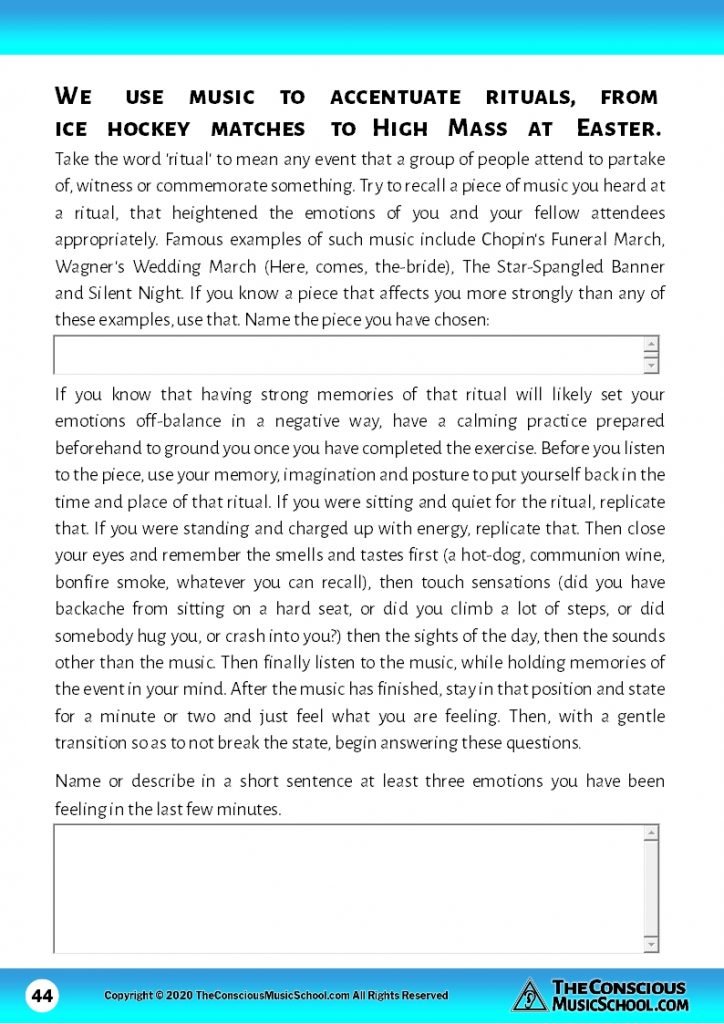 Once you have focussed that perception within yourself, and begun a conversation with your subconscious mind about your music-listening,  you’ll learn to describe your musical experiences accurately, and you’ll begin to get an instinct for how music affects you in the long-term.

From this place of understanding and discernment, you can make wiser and healthier choices in your music-listening for you and those around you.

As befits such a personal thing as music-tastes, Soul-Food Or Poisonous Music? is a course designed for you to follow at your own pace, with your perceptions and understanding growing at a rate that suits you.

Don’t go thinking that means you’re on your own studying this course – far from it. Included with the course is membership to the private Soul-Food Or Poisonous Music? study-group on Telegram, where you’ll be encouraged to share your answers and thoughts from the exercises, and get into deep conversation with fellow students about our experiences from the course. There’s also irregular ‘Ask-me-anything’ live sessions hosted by the author of the course, Simon Siddol, to help you past any particular sticking point. 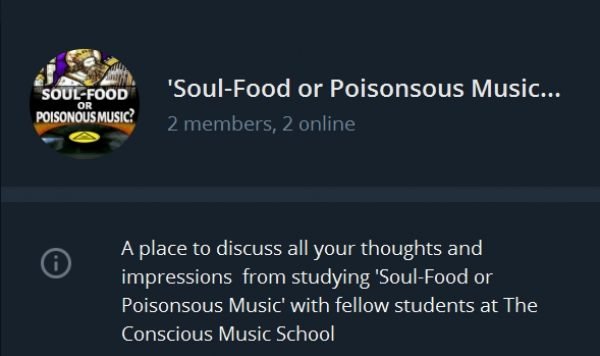 So, you have the best of both worlds – work at your own pace and a place to come to for feedback, discussion and support as and when you need it. (In other words, the ideal conditions for artistic and psychological self-study.) In as little as twelve weeks, you could be making healthier choices from a new place of understanding in your music enjoyment!

So how much would you pay for a course that will teach you that kind of clarity and discernment?

Right now,  you can get Soul-Food Or Poisonous Music? A beginner’s guide to music appreciation for your psychic and emotional health for the compellingly affordable price of…

That’s right: One of the many missions of The Conscious Music School is to get this knowledge into the hands of as many people as possible, which is why, as an introductory offer for the people who are ready to invest now, you can get this course for just £27 – less than you’d pay for a night of getting deafened by cheesy pop in a nightclub! (And a whole lot better for your sanity and your hearing.)

Don’t leave it to chance – the effect that music has on you can be your saving grace or your Achilles’ heel. Wouldn’t YOU prefer to consciously make that choice?

Get the course
for just £27 today